Founded almost 50 years ago, The Patisserie Inc. is one of Hawaii’s largest and oldest bakeries.  We are very proud of our product, of course, but also of our history.  Started by a German and a Frenchman, and continued today by an Italian family, we bring European style breads, cakes and pastries to Hawaii’s most distinguished restaurants, hotels and grocery stores. Today, The Patisserie is owned by Colleen and Robert (Bob) Paparelli. Originally, the company was started by Rolf Winker from Dresden, and Michel Martin from Nice.  Rolf got his start at the Kahala Hilton, as it was called in 1964 when the hotel opened, and worked in the bakery under Executive Chef Max Wilhelm and Bakery Chef Hans Wierbel.  Michel moved to Hawaii in the 1920s and started as a waiter.  During World War II he started a tiny restaurant in Wahiawa called Michel’s, which thrived in its original space until 1959, when he moved it to the Colony Surf, where it continues to serve and continues to delight guests today. In 1968, Michel partnered with Rolf and the two started The Patisserie, a wholesale bakery with one retail café in Kahala.  With ten employees and a space of 3,000 square feet, the partnership prospered and the company grew a reputation for quality baked pastries, cakes, stollen and lavosh, which were a novelty in Hawaii at that time.

Robert Paparelli was born in Detroit, Michigan and heavily influenced by his Italian grandmother, who was the matriarch and driving force in the family.  Bob’s grandfather died at an early age, so grandmother (Nonna as her family called her) started a soda company called “Garzoza’s” and made a fizzy drink she labeled “Roma Up.”  Raising five children on her own under her watchful eyes, everyone worked in the company and by the time Bob was born, the business had expanded to a catering business, banquet halls and a commissary serving five facilities in East Detroit.  At 9 years old, Bob was responsible for answering phones and helping in the kitchen.  By this time, Nonna Paparelli had a dozen products she was custom labeling and distributing from the commissary, including Italian entrees, salad dressings and baked goods.

Robert, Bob’s father, was the youngest of three sons, but  was not in line to inherit the business in a traditional Italian family.  Seeing the writing on the wall, Bob moved to Mesa, Arizona in his 20s to look for his future.  He found employment at a hotel food and beverage department and met the love of his life, Colleen.  Married after dating only ten months, the couple jokes today that they must have sensed that Hawaii was in their future because their wedding shower had Chinese food, rainbows on the invitations and anthuriums.

The Paparellis opened an ice cream parlor and a bakery in Arizona, before Bob took a job working in the bakery department of Safeway, running more than 30 stores all around the Southwest.  Laid off after September 11, 2001, Bob got a six-month contract to turn around Hawaii Baking Company (the old Holsum/Oroweat Bakery) in Waipahu.  The turn-around was unsuccessful (Hawaii Baking closed in October 2003), so once again, Bob was out of a job.  But by then Bob was smitten by Hawaii’s beauty and its people and decided he did not want to leave.

A friend introduced Bob to Rolf, who by then was the sole owner and wanted to retire.  Three banks, a large loan and some nervous nights later, Bob moved Colleen, his daughter Sandra and his son Marc to Hawaii and bought The Patisserie.  Since 2004, they have moved the company twice (without missing a day of baking) and tweaked their business model, so The Patisserie now has a 27,000-square foot facility in the Pearl City Industrial Park and approximately 70 talented employees.  The retail outlets are gone and the company focuses on daily deliveries to cafés, restaurants, grocery stores, hotels, and military buyers around the state.   The product lines include some well-known local brands, including Da Kine Donuts, Paradise, Harvest Hawaii and Rolf’s Lavosh.

The family and the company’s history reflect the Paparellis’ values of hard work, shared sacrifice and shared success.  As individuals and as a team with our valued employees, we have worked through good times and bad, sometimes hunkering down, sometimes celebrating.  We apply our best efforts, motives, and ethics in our everyday work and take pleasure in the favorable feedback and compliments we receive from our many good customers.

As the company evolves and develops new product lines, The Patisserie is in good hands.  Son Marc Paparelli married a smart, local accountant, Kesia Paparelli, a couple of years ago and is on his way to proudly continuing the family business one day. 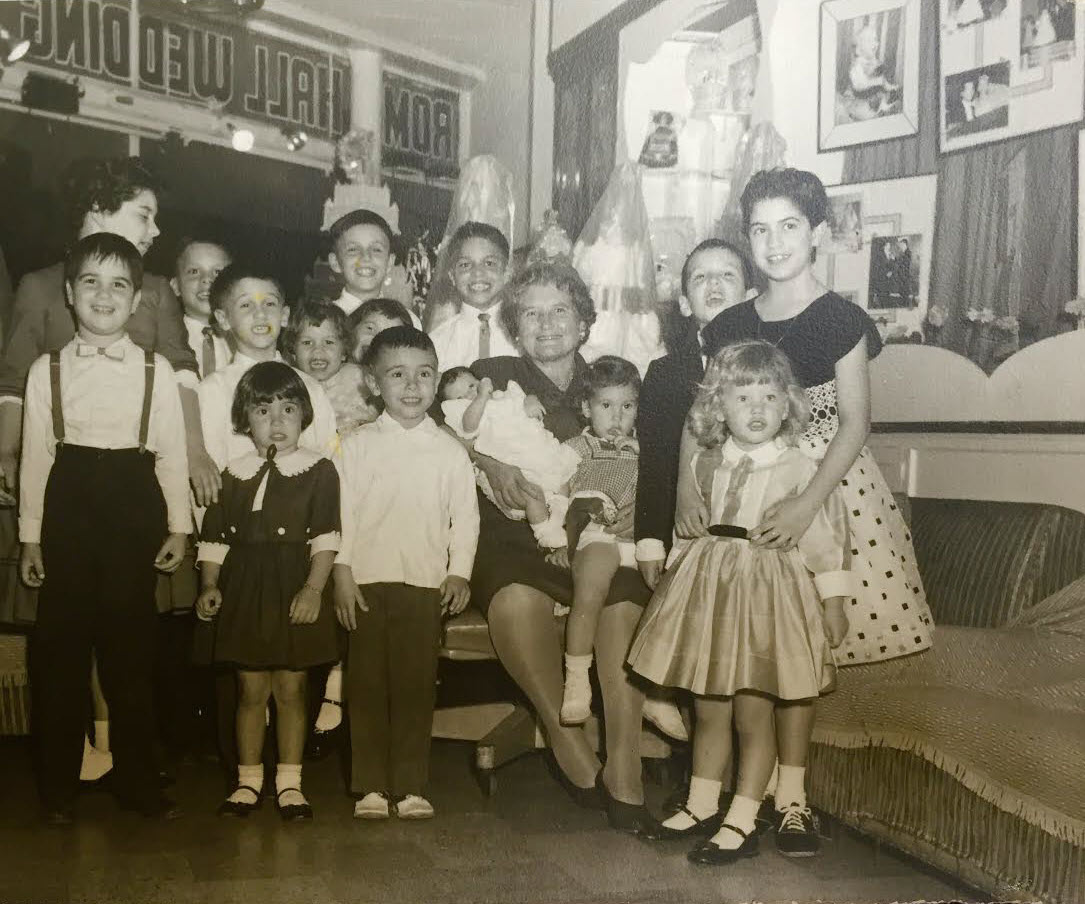 We believe in the importance of giving back to the community and supporting our local neighborhood by being involved with the community and participating in local Hawaii events. The following are some of the organizations that The Patisserie enjoys supporting: 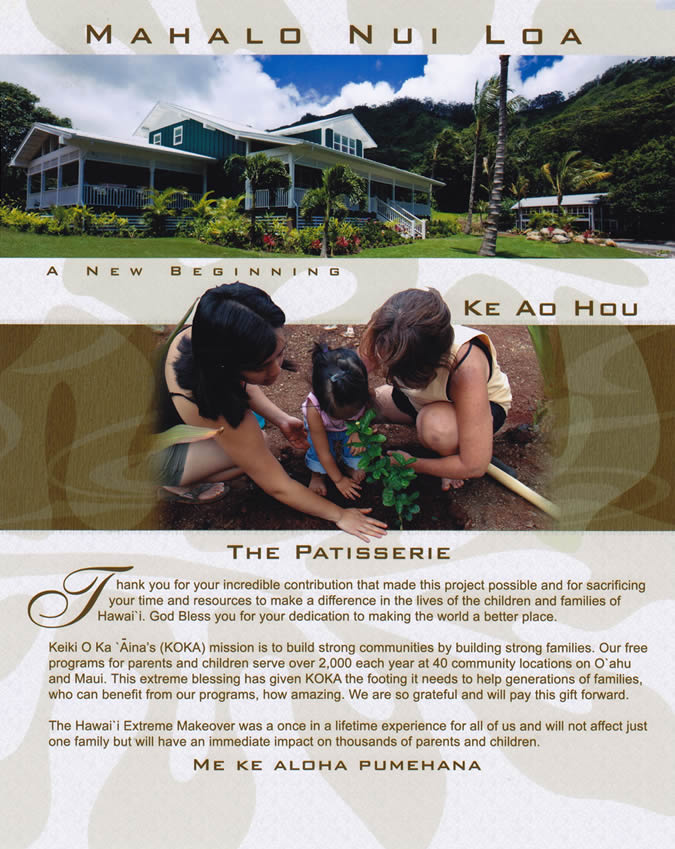 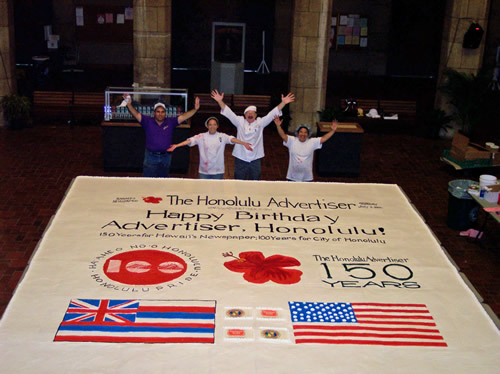 In July of 2006, we produced and decorated Hawai‘i’s largest cake for Honolulu Advertiser’s 150th Anniversary and City of Honolulu’s 100th Anniversary. It was 15’ by 18’ and weighed approximately 1170-lbs (900-lbs of cake and 270-lbs of butter cream icing), and took more than 10 hours to decorate with 4 decorators and 6 helpers.